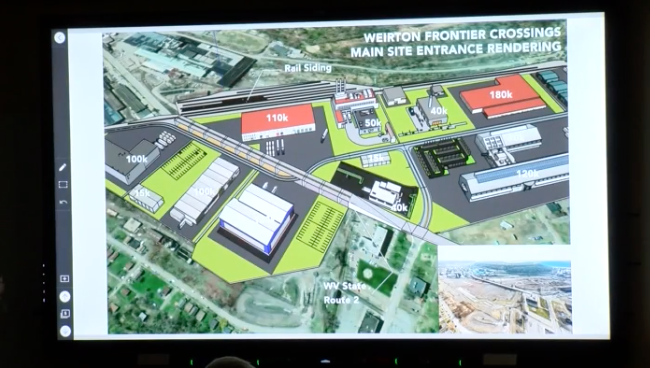 WEIRTON, W.Va. — The city of Weirton and Frontier Group of Companies is seeking $65 million of investment to transform the former ArcelorMittal site into shovel-ready property for massive business investment.

Since the decline of Weirton Steel, Weirton has experienced a 38 percent population decrease. What the future holds for Frontier Crossing could be jobs and infrastructure brought back to the community.

“I think if this comes back to fruition, it will be a big shot in the arm to Weirton and bring a vibrancy back like when I was growing up,” Ward 6 Councilman Enzo Fracasso said.

“This area has been carrying the country for years with our steel industrial heritage,” said Pat Ford, business development director, Frontier Group of Companies.

Frontier has already put $80 million into the $145 million project. What’s left is a three-phase development of public access to the site through road, water port, and bridges.

“There are a number of programs from the U.S. ETA to the U.S. EPA to the U.S. DOT that helps stimulate economic development in the U.S.,” Ford said.

Therefore, the money exists. They must seek the right opportunities to retrieve it — the final catalyst in hopes of to making the site the second petrochemical hub in the U.S.

Right now, there’s only access from East Street and a small gate over the Lee Avenue Bridge. They need to bring more access to it for general business public. The focus is to draw on energy, data, petrochemicals, value added metals and logistics companies to Weirton.

“What we are confident of is if this access road were built, if the bridges were prepared, and the ports were developed, we would see immediately engagement of $1 billion of private investment that would generate close to 750 jobs,” Ford said.

Is the project the right decision for the city?

“Oh without a doubt,” Fracasso said. “Council supports at 100 percent. We’re making all the right moves.”

The city of Weirton is expanding $40 million, possibly, with Hancock County contributing to water and sewer expansion.