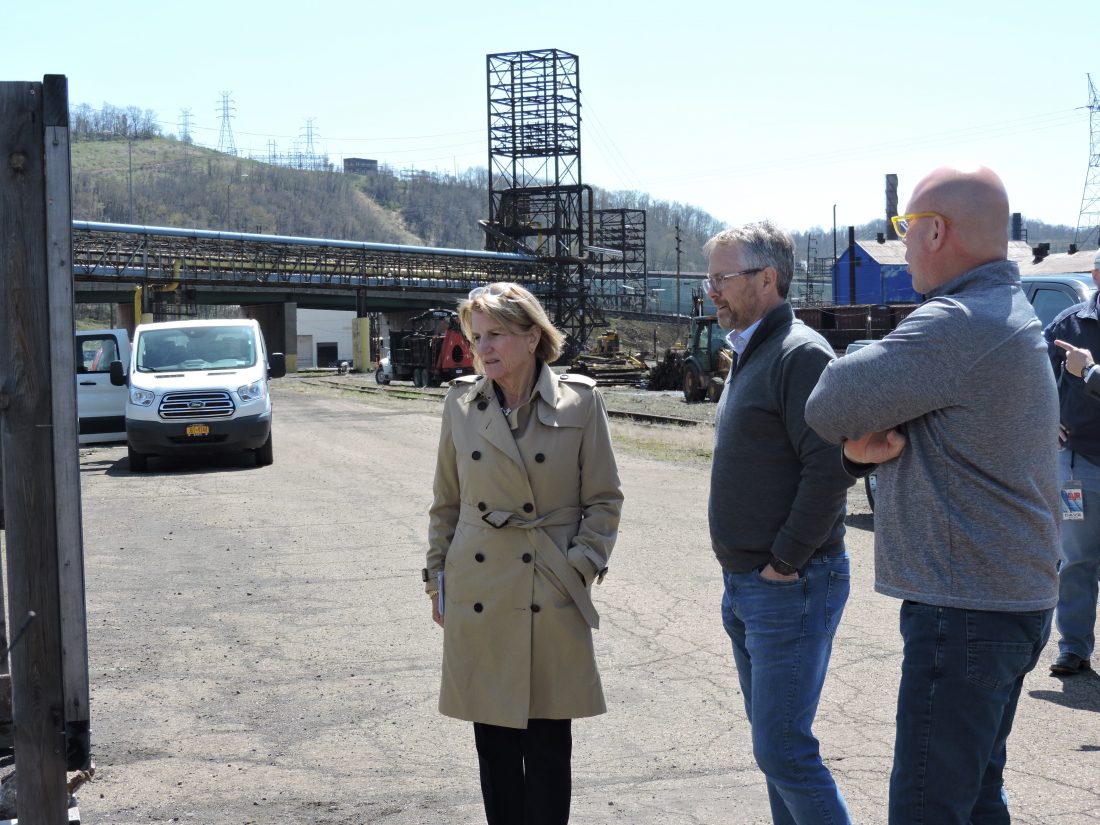 WEIRTON – After helping secure millions of dollars in funding to help with projects in both Brooke and Hancock counties, U.S. Sen. Shelley Moore Capito visited both Weirton and Follansbee on Wednesday to see and discuss progress made.

Capito, R-W.Va., spent the first part of her day meeting with representatives of the Frontier Group of Companies, the City of Weirton, and the Brooke-Hancock-Jefferson Metropolitan Planning Commission, hearing about plans for the Frontier Crossings development. Later, she made a visit to Follansbee to discuss improvements to the city’s wastewater treatment system.

Capito, along with U.S. Sen. Joe Manchin, D-W.Va., and U.S. Rep. David McKinley, R-W.Va., were able to arrange a combined $4 million in Congressionally directed spending for the construction of a planned industrial access road through Frontier Crossings.

“I’m really excited about what I’m seeing in Weirton,” Capito said while touring the property.

The senator noted continuing efforts from Congress to invest in the nation’s infrastructure, including passage last year of the Infrastructure Investment and Jobs Act, which was supported by Capito, Manchin and McKinley, explaining such programs are vital to economic development in West Virginia.

Rob Zuchlewski, chief operating officer of the Frontier Group of Companies, explained the company has put in a lot of work in the last five years to rehabilitate its property in Weirton to prepare it for future business opportunities, and has received support from Capito throughout that time.

“She’s been very engaged in the entire process,” Zuchlewski said. “We’re fortunate to have the senator here to show her the improvements.”

Capito was essential in securing $300,000 in seed money for the project, according to Pat Ford, business development director of Frontier, which allowed for some early planning and market analyses for Frontier Crossings.

“Sen. Capito has been with us since day one,” Ford said, noting those analyses have helped in ongoing efforts to attract new businesses, which, he said, amount to an anticipated $1.2 billion in investments from business prospects.

Construction of the planned access road, which Ford explained will be for both public and private use, will be key in attracting those prospects.

“They all say the same thing, ‘It’s a beautiful site, but how do we get there?’” Ford said.

Of the Congressional spending designated for the road project, $3 million was awarded to BHJ, with $1 million going through the City of Weirton. Ford expressed appreciation to the two entities for their cooperation in the efforts.

Capito explained additional help for Frontier Crossings could be coming, noting there are two grant applications filed and her office is lending its support in order to obtain those funds.

In Follansbee, local leaders discussed goals and thanked Capito for her support of an ongoing project.

“We certainly thanked her for the wastewater grant. That was huge for the city,” said Mayor David Velegol Jr., who referred to a $10.2 million grant she secured for improvements to the city’s wastewater treatment system.

Designed by Ghosh Engineering of Charleston, the project will involve upgrades to the city’s wastewater treatment plant and pump stations near the city’s fire station and south end and the separation of combined sewer and stormwater lines.

She noted federal funds also have been allocated for the extension of internet service to unserved or underserved areas, which the West Virginia Broadband Enhancement Council and others have used, with state funds, to establish the Line Extension Advancement and Development and GigReady Initiative grant programs.

Follansbee officials have made plans to use a portion of federal American Rescue Plan funds awarded to the city to install internet boosters on new street lights to be installed along Main Street.

“I don’t really care how we do it as long as we get it to homes and businesses,” said Capito, who added nearly 1,100 West Virginians expressed their desire for high-speed internet through the Share Our Stories link on her website.

“People were writing me stories and it wasn’t about how good their internet connection is,” she said.

Much of Capito’s visit involved a private meeting with officials with the Port of West Virginia and Empire Diversified Energy, its parent company, at their headquarters in the Bluewave Center, formerly Follansbee Middle School.